Termidor Dust is the culmination of over 10 years research in Australia to find the perfect nest elimination product. Termidor Dust is applied directly on to the termites, either inside your home or onto activity around the yard (trees, fences etc). Termidor Dust is also perfect for treating active termites in bait stations. After treatment, the termites carry the dust particles on their bodies and eventually back to the nest (where ever that may be) via the unique Transfer Effect.

Extensive Australian research shows shows 4 weeks for total termite elimination. This is much faster than expensive baiting systems and you will not require numerous visits from the Pest Control Operator to achieve success. Eradication of one termite colony with Termidor Dust dose not guarantee protection from a future attack by other colonies in the area.

Termite Dusting is not designed and should not be used as a stand alone treatment. Therefore a continuous Chemical treatment such as a Termidor Residual Termiticide treated zone should be applied immediately following successful eradication of termite activity in the home to ensure protection for the future.

Termidor, containing the chemical Fipronil is a new Termiticide available in Australia. Already proving to be extremely effective in other parts of the world, Termidor is set to change the way termites are treated in Australia. In the USA, Termidor has been used to treat more than 600,000 homes, and after 8 years of testing has returned 100% effective control of termites.

Unlike traditional Termiticides Termidor has a transfer effect on termites. Whilst most other Termiticides act as repellents rather than killing them, termites can often find gaps in a soil barrier and thus re-enter the home. As termites cannot detect Termidor in the soil they will tunnel into the treated area, Termidor is deadly to termites when they either ingest it or make contact with it.

Termidor (Fipronil) adheres to the termite exoskeleton and is absorbed into the termites body where it kills it within a few days. Because termites groom each other they pass the chemical from one termite to another spreading it across the entire colony Termites eat or remove other dead termites thus spreading the deadly effect of fipronil further.

Tests have shown that Termidor should remain effective for over 5 years, in most conditions, giving long term protection. Termidor is classified as a Schedule 5 caution product, this means it is of low hazard to people and to pets. In fact Fipronil is used extensively for flea control on cats and dogs in products such as Frontline. Whilst more expensive than other Termiticides often used, Termidor has a range of benefits that outweigh the additional cost.

A new Class of Termiticide, Termite Barrier Plus Colony Management! When Termidor is applied to soil around a home it creates a treated zone that works in 2 ways.

CONTACT - Close to the point of application (where the concentration is highest) where termites enter the treated zone they will die quickly an no further tunneling in the soil takes place.

INGESTION - Further out from the point of application, because the concentration of Termidor is lower the lethal effects of Termidor are delayed. This allows termites to transfer Termidor back to the colony thus resulting in the death of large numbers of termites very effetely. Termidor works quickly, within 3 months- unlike other baiting systems that can take up to 12 months to control a colony. Termidor works to protect the home from the day its applied. Termidor treatment Brisbane is a highly effective termite control solution.

Termidor is a long term residual (8 years as per the label). Termidor is the only soil-applied Termiticide that has this effect on the colony. 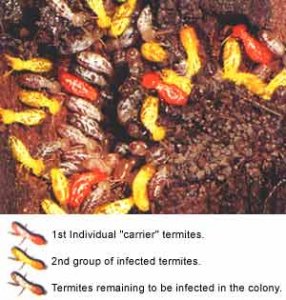 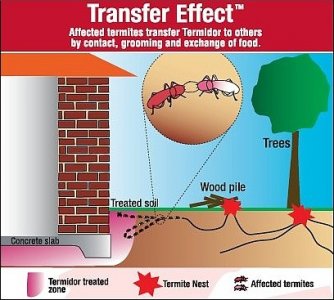 Termites feed each other primarily by passing food from mouth to mouth. They groom each other. They contact each other as they forage for food. Termidor takes advantage of these social behaviors. As well as eating Termidor, a termite will also unknowingly pick it up and carry it back to the colony on its body. So every termite it contacts, feeds, or grooms will itself become a carrier, contacting and infecting others.

But because the active ingredient in Termidor is slow acting, and allows the termite to continue its normal routine, it remains active long enough to transfer the Termidor to a large number of other termites in the colony before dying itself. This combination of ingestion, contact, and the "Transfer Effect" results in unparalleled efficacy. Over 8 years of test data show Termidor provides 100% termite control. And Termidor delivers results in a matter of weeks. That's 2 to 6 times faster than a termite bait/monitoring system.

Features and Benefits of Termidor

The latest in Non-Repellent Termiticides is Altriset. Altriset is deadly to termites. It works by targeting termite muscles and when termites come into contact with Altriset their jaw muscles become paralysed and they cease feeding within hours and stop damaging your home. But they don't die straight away-the termites stay alive long enough to transfer Altriset onto other termites and back to the nest resulting in colony control. Alitriset eliminates termites from structures within 3 months and as it is applied to the soil around your home it provides protection for years.

Unlike most termite products that are made from chemicals which can be hazardous to the environment, Altriset has a mode of action that is only harmful to termites. In fact Altriset is the ONLY liquid Termiticide that is exempt from poison scheduling by the Australian regularly authorities which means your pest manager doesn't have to wear protective gear when mixing and applying the product.

Altriset has very low toxicity to pets, birds, fish, earthworms and even honey bees, which means you can protect your home with minimal impact on the environment. 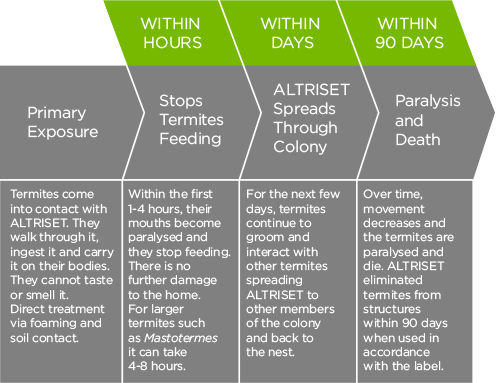 Altriset has outstanding transfer properties from termite colony control. It's not always possible to locate termite nests so direct treatment of nests is not always possible. Termites exposed to Altriset do not die immediately and are able to transfer the active ingredient to other termites and back to the nest leading to greater chance of complete termite colony control. 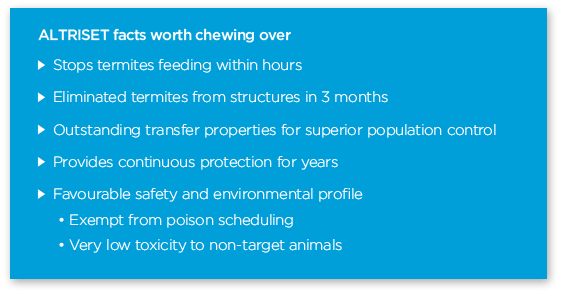 Biflex Ultra -Lo-Odour is a Bifenthrin based termiticide ,Biflex is a a synthetic pyrethroid modelled on natures own insecticide "pyrethrum" .Biflex quickly kills any termite that comes into contact with it,but it also acts as a repellent to keep termites away from your home.

Biflex provides you with the longest protection period of any termiticide and is also very cost effective, saving around $300-$500 on the cost of a full treatment .

A proven termiticide chosen by over 1 million Australian homeowners

Biflex is very low volatility ,that means that after a treatment your not exposed to airborne residues compared to some generic products.

Biflex is safe around vegetables and fruit trees because of its non -systemic features. 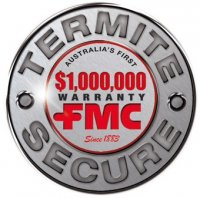 Biflex Ultra treatments can also be be covered by the Eflex Warranty giving you additional peace of mind (details on our warranty page, on on the Fmc website --see our links page)

Biflex has had  years of proven results under Australian conditions.

Biflex will not be affected by rain or watering .

Biflex is the ideal solution when your looking for a cost effective long term termite treatment.