Cockroaches due to their activities may carry diseases and may transmit diseases to people. They usually reside in dark, humid places and are mostly nocturnal, resting during the daytime in cracks, crevices or warm motors of appliances. Some species are capable of flight. They are capable of contaminating foods and food handling areas with droppings, cast skins, egg sacs, regurgitation marks and odours.

The most common species encountered are 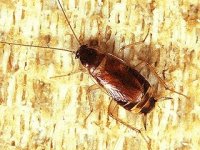 German Cockroaches can be a major problem in kitchens , they are prolific breeders and during warmer months population growth explodes. They can live in refrigerators, ovens, dishwashers, and small appliances,as well as the smallest crack and crevice. They are a relatively small cockroach with nymphs (young insects) 2-3mm to adult up to 25mm.

Australian, American and to a lesser degree the Smoky Brown cockroaches can be found throughout a building. They are much larger than the German roach up to 55mm and they fly at night.

Treatment varies according to the particular species but generally Cockroaches are controlled by a range of methods including application of liquid residual sprays, to skirtings, and application of gel baits to cracks , and dusting of external weep holes in brickwork.